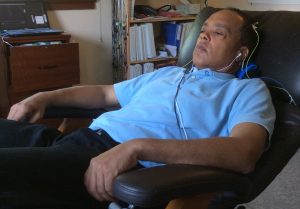 The case studies in this section are the actual experiences of our clients (although we have changed the names and some details to protect their privacy). We can’t guarantee that you will have the same results, but we can assure you that these results are typical of those we see with our clients.

If you want to ask about other issues that you hope might respond to NeurOptimal training, please contact us. We are in contact with many NeurOptimal colleagues, and can ask about their experience with the issue that concerns you.

Cal was brought to us by his parents. He was a good looking, popular, athletic kid and captain of his high school soccer team, but getting D’s and F’s in school. He had always struggled with focusing, but now not only were his parents alarmed, but he was too, as without better grades he would not be permitted to play soccer. He also was in constant verbal and physical fights with his younger brother, of an intensity and frequency that scared his mother. They did not initially come to us with neurofeedback in mind, but rather psychotherapy to help this underachieving adolescent. After assessing and ruling out drug involvement or a significant mood disorder, we decided that his attention and impulsivity issues were at the root of his struggles. Thus, we began neurofeedback training, as neither Cal nor his parents wished to use medication.

Cal found the training pleasant, but initially did not notice much between sessions. After 3 or 4 sessions, his mother came into the office and stated with appreciation that the fighting between the brothers had diminished dramatically and, in fact, was almost non-existent. A few sessions later, Cal reported that he was more interested in school and what the teachers were saying. In fact, he began looking forward to some classes. Moreover, instead of avoiding homework completely, he was grudgingly doing much of what was assigned.  Gradually his grades began to improve. After 20 sessions, his grades were above the danger zone: all B’s and C’s. He was playing soccer and feeling much more relaxed and better about school. His parents, both teachers, remained a bit disappointed—they thought he should be getting A’s and B’s., but Cal he was ready to take a break.  He was doing well enough that he no longer felt the need to come for sessions, since school, friends, soccer, dating and driving were a greater priority.

Brian was in trouble. He was in the seventh grade at a local middle school, his parents were finishing up an angry divorce, he was flunking all of his classes and the principal was threatening to expel him from school for his aggressive behavior toward his teachers. He, too, entered psychotherapy rather than neurofeedback training as his parents were desperate to help him. He had been diagnosed in early elementary school with ADHD and his parents had tried medication, but that had altered his personality in a manner that unnerved them (he became consistently listless and/or angry). They were adamant that they would not try medication again. Clearly, there were multiple factors in Brian’s life that were impacting him and making this a troublesome time. Drug use was ruled out; he was not particularly oppositional (no more so than an average middle school kid) and he genuinely wanted to do better.

We explored the nature of his aggressive behavior toward teachers, and learned that he was making animal sounds that were frightening to his female teachers. When we asked the vice principal what animal sound Brian was making, he said it was a goat sound and an angry goat at that. Regardless of the absurdity of the school’s response to Brian, he was clearly a kid in big trouble.

We quickly developed a good relationship with him, as he was both earnest and frightened. When asked about school and his animal noises, he was not quite sure why he made them…it just happened. As we got to know him better we discovered that he made them when a teacher was reprimanding him or making a demand upon him in which he felt overwhelmed. What we also discovered was that he had one of the worst cases of Attention Deficit Disorder that we had ever come across. He literally could not pay attention to his teachers and was feeling lost and stupid all of the time.

He had developed a strategy that it is better to act the fool than to be found out to be a fool. Because of the real danger of expulsion we decided to do neurofeedback training twice a week for 10 weeks. After only a few sessions, Brian began to tell us he could now listen to his teachers and follow much better what was going on in class. Moreover, his parents (both in their separate homes) told us he seemed to be able and willing to follow multi-step directions, and just seemed more mature. Brian also reported feeling less tense overall. At the end of 10 weeks there had been NO other aggressive or other incidents at school. Moreover, he had passed his first tests of the year and was no longer being actively threatened with expulsion.

Two years later his father called to tell us that his son had made his high school football team and was a dedicated athlete (training at school daily at 6am in the weight room). While academics were still a challenge, he was performing in the average range, had a full social life, had adapted to living in two homes and overall, was a happy young man.

Margaret had a lifetime of experiencing great anxiety, and nothing seemed to reassure her. She came to us because she had recently been diagnosed with PVC (premature ventricular contraction), a heart condition —benign, in her case—that involves skipped heartbeats and a fluttering sensation in the chest.  Although she had been assured that it was not dangerous, she continued to experience intense worry and dread that she was going to have a heart attack.

Margaret had ten sessions of neurofeedback.  She quickly noticed that her experience of physiological anxiety diminished.  As her anxiety diminished…so did her heart palpitations.  By the end of ten sessions, her loved ones were telling her how much calmer she seemed, and as she said, “It’s so much easier to let things go.”  Fear of a heart attack had essentially disappeared.

Mark was a 30-year-old middle manager in the music industry, who felt he was in his dream job.  Then two auto accidents just a few weeks apart resulted in concussions that produced excruciating headaches and memory loss that made it nearly impossible for him to do his job.  His scores on neuropsychological tests were in the normal range, but Mark was insistent that he did not feel like himself.

After one session, he had his first day in six weeks without a headache.  At the fourth session he said,  “I’m not there yet, but I can tell I’m moving in the right direction.”

When he was re-tested after twelve sessions, his scores had moved from around the 50th percentile to around the 95th—no wonder he had been feeling impaired!  This was a very gifted young man who had experienced great diminishment, but had now gotten his good function back.

When Mark stopped training after 14 sessions, his headaches were entirely gone, as were his memory problems.  He was once again fully functioning in his job and life.

Ready to learn more about neurofeedback and what it can do for you?

Find out how to get in touch!